Thank you to SUNY Oswego, Department of Technology, Design Studio for hosting this, the fourth annual, Synergetics Collaborative workshop!

This was our 4th workshop in Oswego held August 12th and 13th, 2006. John and Judith Belt hosted a marvelous get together the Friday evening before the Workshop with an opportunity for old and new friends to meet.

Saturday's events started with opening remarks. Joe Clinton brought up some of the issues of our growing organization. Momentum is needed for the Synergetics Dictionary since the expenses to complete this project need to be met. Fundraising will be aided by the incentives of a limited number of Porcelainia Buckyballs by Bobby Jaber and Jitterbug Transformation Sculptures by Joe Clinton that are available to donators. CDs and DVD materials are also available to help grow our group by providing the information that is contained in our workshop and symposia. Victor Acevedo with the help of Phil Haggerty videotaped this workshop as well so what happened will go down in history. And one very positive effect is that the workshop is well documented. We were also welcomed by John Belt.

Our first workshop on "Building a Compound Curved Metal Shelter" was organized by Dick Fischbeck who had been working for many months on the randome project motivated by recent events such as Katrina and tsunamis and earthquakes around the world that have alerted us to the pressing need for emergency shelters. Dick's concept was a dome that could be built inexpensively from materials commonly available in disaster relief, and could be built without a lot of skill or instruction. The chosen material was about 40 2.5x8' sheets of 29 gauge galvanized corrugated steel and bolted together with about 200 bolts. The sheets will have their compound curvature pre-fabricated by slitting and folding to create a vertex with angle deficit. Each sheet will have three vertexes in a line. Each vertex will have about 5 degrees of angular deficit. Sheets are staggered during assembly to have the vertexes in triangular relationships. No two vertexes are more than one meter apart. A link to a picture of an example sheet with its 5 degrees of angular deficit. When built as overlapping shingles they created a dome without measuring. Other shapes can also be made with some variations such as saddle shaped sheets. Dick had already constructed part of the dome because the time allotted would not have been sufficient. Because the dome was built in one piece from top to bottom which could have been dangerous if too many people were involved at once a couple of side workshops were held simultaneously. A dodecahedron and a tetrahelix were built out of a commonly found hardware used for roofing, twisted metal with 3 arms which made visually interesting skeletons.

We finished a little early and Matt Slawson gave a demonstration of a computer milling machine he built showing how it could create vertex discs to build a buckyball. The machine made short order of drilling precisely spaced and angled holes and trimming the disc to size for a tinkertoy type structure that would make a fun toy and has also been experimented with as a mobile chicken protection structure. Then a brief tour was made of the back studio filled with models by Tom Miller, Don Briddell, Joe Clinton, Roger Tobie, Dick Fischbeck and Rupert Ravens who brought a drawing by Fuller and a photo he had taken of him.

Following lunch there was a discussion about Dick's work in how particular structural analysis could be done using minimum and maximum ranges. Briefly discussed were flooring and insulation materials and the necessity of staking to the ground. Earlier the dome was moved outside by 7 or 8 people estimating the weight at 350 pounds. (See the end of this article for another very interesting detail about the dome.)

We were very lucky to have George Hart at our workshop this year and he gave the 2nd presentation which was putting together a 4-foot diameter marine plywood sculpture called Compass Points, based on a rhombic tricontrahedron. George is a fantastic interdisciplinary artist who being a computer science professor at SUNY Stoney Brook has found a way to design intricate hedra that interlock in exciting ways. George entertained us and I suppose stumped us. He had designed some interlocking hedra puzzles that I don't think anyone managed to get together. Luckily George knows how to put them together in about a minute. His sculpture which measures about 4' diameter was left as a gift to John Belt and will undoubtedly be installed somewhere in his exciting design kingdom on the shore of Lake Ontario!

Don Briddell gave the next presentation on the development of his Field Structure Theory. The focus of his latest work has been in responding to the physics community's resistance to the modeling of atomic structure, a pursuit of several of our members who use synergetic tetrahedron based concepts to understand the behavior of existence down to the most minute. Don has created several new variations on his beautiful, twisted models in an effort to explore the extent of field structure theory. Some promising correlations of the numbers of atomic mass ratios with the twistings in the models leads us to think Don may soon make a breakthrough with the physics community. Bob Gray who has a strong background in physics explained that the mass ratios may not be so clearcut in the experimental evidence. CJ suggested that even if the numbers are close, the model could be fuzzy (the flat Earth model is widely criticized as being "wrong" but carpenters build closets and rooms based on a flat Earth approximation every day: engineering insight can come from inaccurate models).

We broke for dinner for about an hour, then met again in the studio for an open discussion that allowed everyone to introduce themselves and talk a bit about their interests and their work.

Sunday started with a presentation by Joe Clinton who first mapped out the development of the Folding Surface Structures and Deployable Kinetic Architecture workshop in conjunction with Roger Tobie and Patrick Doyle. Joe gave a power point explanation of the duality of planar and vertex edged structures. Apparently the lack of understanding of this duality in the design world has led in the past to many design failures. The issue is that what is stable in a plate construction may not be stable in a lattice structure and vice versa. The tetrahedron is stable in both. Joe has a vast knowledge of structure and a concise way of transmitting small chunks. Every time I see him I learn something new. He had brought along 3 large models, one a four cylinder dodecahedron, to build using a lightweight insulation panel that he bent into cylindrical shapes with nylon line and small tensioning units attached to the corners. Gorilla tape was used to hinge plates together. Joe has been intensely studying the intersection of cylinders and brought this interest to an investigation of plate structure.

Roger Tobie then began his Folding 101 class. After a brief introduction to materials and methods we began folding columns and polyhedra. Folding can greatly increase surface strength and create rigidity or expandability besides offering a vast array of visual effects. Unfortunately we only grazed the surface. Some forms can be quite challenging and require patience and precision. After lunch the 3 workshops on expandable structures went on simultaneously and most ppeople were able to sample only a bit of each.

Meanwhile Patrick Doyle gave individual instruction to the people who wanted to learn his technique of building expandable structures with bamboo and latex elastic bands. He explained the subtle differences involved in the handedness of vertices and how the way the sticks overlapped has a big impact on the foldability of the structure. Chopstick and shish kabob scale models were made.

The last organized workshop was on Tom Miller's Genealogy of shapes which was held in the exhibit room where the models were laid out in a sequence which helped explain relationships that seemed organic and natural. Tom has integrated the first 25 simplest geometrical systems around one common center with all linear/angular measurments relative to each other. Tom as a self taught geometer entertained us with his terminology, some of which is Fuller based and some which he has come up with on his own. Controversy erupted when he called a polyhedron an energy event which outside the Fuller world would probably seem outrageous but most of us enjoyed all this as it helps illustrate how creative language choices (including Fuller's) can sometimes complicate more than educate.

After Tom's workshop this controversy was carried over into the planning session that lasted over an hour. Naturally not everyone agreed on what direction the Synergetics Collaborative should take. Although for the most part people have enjoyed the events, there remain problems with how we can reach out to women, minorities and young people, and what roles we can and should play in improving living conditions in the world. Our biggest discussion was in tying to figure out what next year's event's focus would be until it was suggested that it be left open to see who wants to present and what they want to present and see how it evolves. Joe Clinton presented a folded sculpture to John Belt as a thank you, and John has courteously invited us back for year 5 and we feel we are honored to accept his offer.

On Monday morning with most of the participants gone one last fantastic event occurred. Dick Fischbeck had gotten the offer to deliver the metal tent dome to a property near Oswego and without the removal of any bolts he illustrated a unique property of the geometry in his contructions by rolling up the dome into a cigar shape for transportation. We skeptical assistants were delighted to see the dome roll up as Dick had known it would, a truly portable dwelling. The photo on the right shows what it looks like on the inside of his rolled up dome. 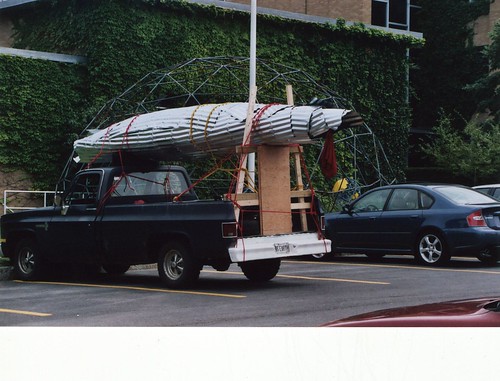 Photos of the Applied Synergetics Workshop

The promotional flyer for the Applied Synergetics Workshop

Please send comments and suggestions to the Synergetics Collaborative webmaster.